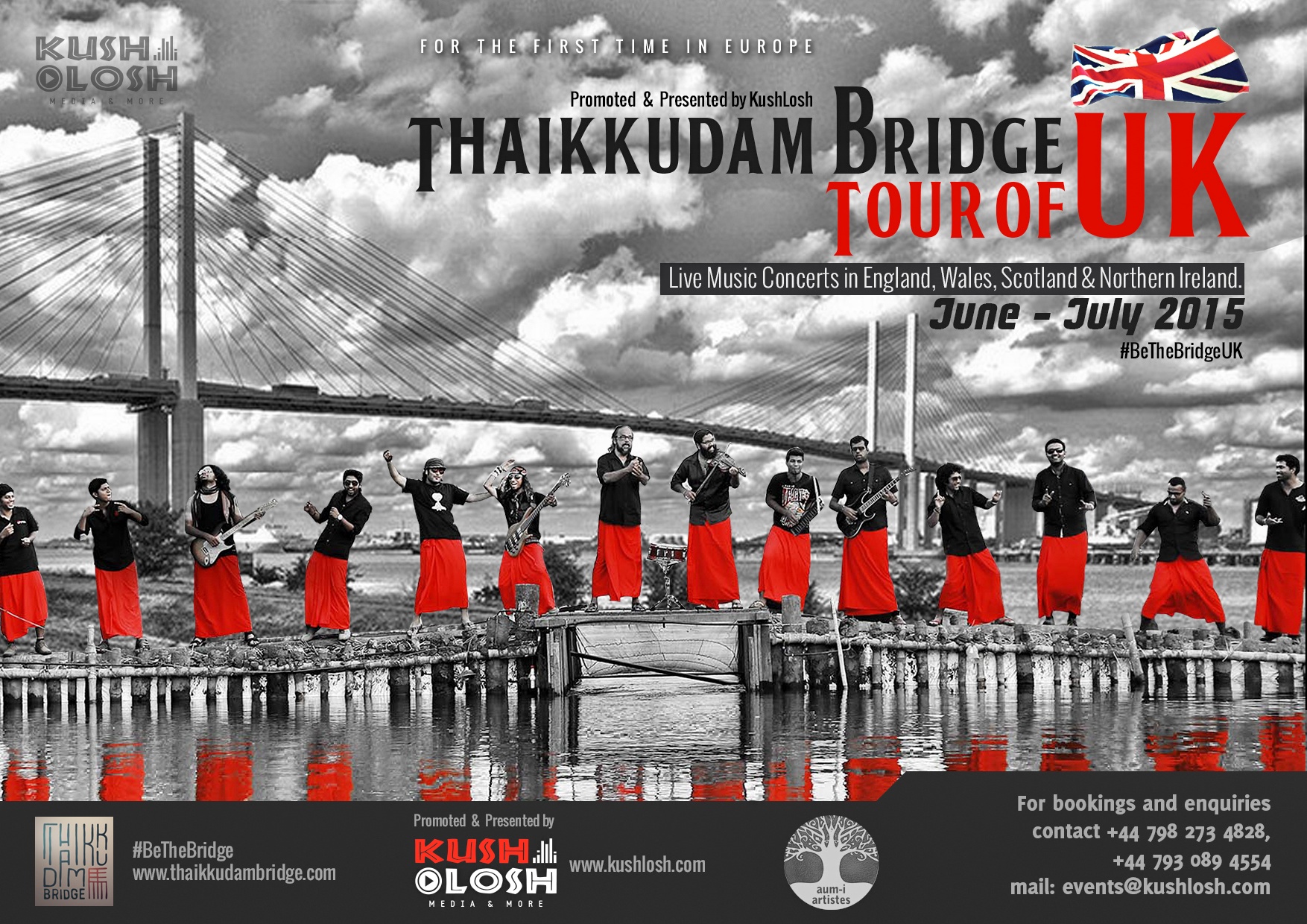 Thaikkudam Bridge is an Indian music band, founded by Kerala based cousins Govind Menon and Siddarth Menon. The band became very famous through the musical show Music Mojo and their own composition fish rock, shiva, chathe which became popular and viral through social media networking sites and YouTube. Since its birth in Sept 2013 in a Kappa TV show featuring independent music, the multi-lingual and multi-genre band has grown to immense popularity. With a Face book community following of 552k and YouTube videos crossing 2.7m views, it is today arguably the most followed band in the history of independent music in South India.

After hosting many successful shows in South India & Middle East Countries and forth coming tour of Australia & New Zealand, KUSHLOSH promotes and presents Thaikkudam Bridge, a 18-member ensemble from Kerala for the first time in UK and rest of Europe that renders popular Malayalam, Tamil, Hindi & English tunes in their own unique style. They catapulted to success following the response of their smash hit ”Fish Rock” which garnered over half a million hits on YouTube within the first month.

The band has done an average of one show every three days since its inception, playing everywhere from school and college gigs to corporate and private shows.  Now, Thaikkudam Bridge is ready to embark on its first tour of Europe starting with UK and then to rest Europe during June – July 2015.

The band performs across all genres and languages, with melody being a forte. The band has also specialist singers and performers with an unconventional band name and an unconventional number of vocalists & performers, Thaikkudam Bridge is a force to reckon within the Musical World. Though Kerala-based, the band has performers from across different parts of India, thereby creating an eclectic flavour representing a class act. With ground-breaking performances and nostalgic re-creational abilities, Thaikkudam Bridge is a Firebrand Musical Band. Very well known for creating a mesmerizing enthusiasm around the audience with power-packed rock performances, Thaikkudam Bridge is a refreshingly enigmatic band.

As the band’s pioneer Govind Menon puts it, Thaikkudam Bridge was born out of a genre less or multi-genre dream to create memorable music. The band consists of 18 friends from different professional backgrounds and from different parts of the country. What unites them is their undying passion for music. Thaikkudam Bridge belongs to India’s diversity, which is perhaps why their music is rooted everywhere.